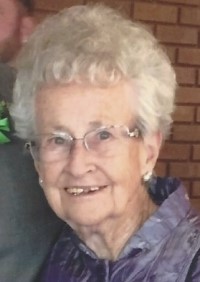 She graduated from St. Anthony School in 1943. She was a 4-H Leader of Burton. She was also a member of the Melrose Victory 4-H. For many years, Margie exhibited her needlework, canned fruits and vegetables at the Mendon Fair. She was the President of the St. Anthony Altar Society for 4 years and was chairman of the card parties. She and her husband loved to cook the potatoes and eggs for the fish fries. Before marriage, Margie worked at Motorola for 7 years. After marriage, she helped Ab milk cows, feed chickens and bale hay. She enjoyed doing needlework and made a quilt for each one of her grandchildren. She belonged to the WCU and the Secular Franciscans. She and her husband were both RSVP members and delivered Meals on Wheels for over 35 years. She got her 20 gallon pin for the amount of blood she has donated in 2012. She and Ab were both Communion Ministers at St. Anthony Catholic Church and Blessing Hospital. Margie also volunteered at the hospitality house and the adoration chapel. Margie was a recipient of the Catholic Woman of Distinction Award for the Diocese of Springfield.

Margie’s greatest love was her husband Ab and she loved traveling with him spending time with her children and grandchildren. She enjoyed family, friends, travel, dinners, Knights of Columbus events, bowling, golf and cards, especially euchre. The family farm had 3 ponds for fishing at and numerous hills to sleigh ride on with grandchildren.